The University Church of St. Anne in Kraków is situated in Św. Anny Street near the Collegium Maius, the oldest building of the Jagiellonian University, which was founded in 1364 and re-founded in 1400.

The church is located within the area of the Old Town, which was established in 1257. The original structure of the church, mentioned already in 1363, was probably made of timber. In 1407, after the fire, the church was rebuilt, funded by Ladislaus Jagiełło, King of Poland. The King conveyed the right of patronage to the University, later called the Kraków Academy, in 1418. Piotr Tomicki, the Bishop of Kraków, established a collegiate church in 1535.

The former Gothic Church of St. Anne was pulled down in 1689, as it was considered too small in view of the growing cult of St. John of Kęty, a professor of the Kraków Academy. Originally, the new church was to be tower less. However, to satisfy the demand of the academics, the designer changed his plan by references to the church of San Andrea della Valle in Rome. The Reverend Sebastian Piskorski, University professor and connoisseur of the Baroque art, supervised the construction from 1692. The church was consecrated in 1703.

The church of St. Anne is one of the most beautiful Baroque sanctuaries in Kraków. Its architecture and decoration recall the Italianate style. A gifted sculptor called Baldassare Fontana, educated in Rome and a follower of Bernini and Borromini, was employed here. The walls were painted by Innocenzo Monti and Karol Dankwart.

The paintings of the presbytery depict the foretelling of Christ’s birth. In the main altarpiece, made in 1695-1698, is St. Anne, painted by the royal artist Jerzy Eleuter Siemiginowski. The stalls in the presbytery were made in 1700 by Jan Olbrosowicz. The pulpit was sculptured in 1720-1721 by Antoni Frąckiewicz, a Kraków sculptor and follower of Fontana. The baptismal font was cast in bronze by Jakub Erlicher, a Kraków master. In the right-hand side of the transept there is an altar – the Confession of St. John of Kęty, dating back to 1695-1703. The sarcophagus is supported by four figures representing university faculties: theology, law, medicine and philosophy. There are four enormous twisted columns around the altar. They are surmounted by figures of four St. John’s: the Baptist, the Evangelist, Chrysostom, and John of Damascus. The Collegiate Church of St. Anne is a shrine which venerably preserves the remains of St. John of Kęty, a professor of the Kraków Academy (1390-1473).

The altar of the Adoration of the Holy Cross with a relief “The Lamentation over Christ” and statues of St. Veronica and Longinus were placed in the left-hand side of the transept. This refers to St. John of Kęty’s veneration for the Gothic painting of The Dolorous Christ, which has been preserved to this day. The monument to Nicolaus Copernicus near the altar was completed in 1822, designed by Father Sebastian Sierakowski. It bears the astronomer’s bust and a figure of Urania holding a shield called “Sobieski’s Constellation”. Furthermore, numerous epitaphs of university professors, portraits painted on metal in decorative frames were placed in the transept. It is also worth noting the commemorative tablet dedicated to Juliusz Słowacki, the eminent Polish poet (d. 1849), which was funded by his mother.

The decoration of the main nave depicts the Church as the Holy City, Heavenly Jerusalem. Six chapels are ranged along the nave, each lavishly painted and sculptured and each having an altar with huge paintings by famous masters. Seeing the church from the side of the chapel of The Adoration of the Holy Cross, there are the chapels of St. Peter ad Vincular with the painting in the altarpiece, executed in 1799 by Innocenzo Monti, St. Catherine of Alexandria with a relief of 1699 in the altarpiece and St. Sebastian with a painting by Paolo Pagani of Milan dating from 1696. On the other side of the nave, proceeding from the porch, there are the chapels of St. Joseph with an altar painting by Innocenzo Monti, 1698; of the Immaculate Conception with a sculpture of the Blessed Virgin Mary, 1699, illuminated from a concealed window and of St. John the Baptist with an altar painting by Karol Dankwart, 1699. Below the organ loft one can see the epitaph of Father Sebastian Piskorski, founded in 1722 by the Szembek family.

The sacristy of the Collegiate Church has retained its 17th century furnishings with eight portraits of University professors and priests, who were connected with St. Anne’s.

The treasury of St. Anne’s, accessible by special permission, has retained a considerable number of goldsmiths’ works, the earliest dating back to the beginning of the 17th century. Most of them were made in Kraków, but there are also works from Wrocław, Nuremberg and from Hungary. These include a unique medieval glass vase connected with St. John of Kęty.

The reliquary for the head of St. John of Kęty, which is of exceptional artistic quality, was wrought in 1695 by the Kraków goldsmith Jan Ceypler, funded by the University scholars. It is in the form of an octagonal box covered with a cupola and viewer. On its walls there are scenes from the life of St. John, some of them taking place in the Collegium Maius. The corners of the reliquary are decorated with figures personifying the Beatitudes and believed to symbolise the Saint’s virtues.

The hand-shaped reliquary of St. John of Kęty was made at a slightly earlier date, before the middle of the 17th century. The radiant monstrance, commissioned in 1717 by the Kraków townswoman Konstancja Puczkowa, is of exceptional beauty. The monstrance is unique because of the statuette of St. John of Kęty beneath the glory and crossed sceptres under the crown, which is the coat of arms of the Jagiellonian University. The cloak of St. John of Kęty, kept in an 18th-century box, has also been preserved.

The foundation charter of the Collegiate Church, dating back to 1535, has also been preserved until now. So have numerous liturgical vestments, the earliest dating from the early 17th century. One precious object is an embroidered red set consisting of a chasuble, a pair of Dalmatians and cope, which according to tradition, was given by King John III Sobieski. Two panaches are also linked with that king. Other chasubles include Italian and Middle Eastern fabrics and even a Polish kontush sash, a traditional element of a nobleman’s robe, made in the second half of the 18th century by Paschalis.

A good many historical objects have survived in the collections of the Collegiate Church, these being paintings of St. John of Kęty and 17th century portraits of university professors, which were once set in epitaphs.

Another object of great interest is a drawing depicting the procession on the occasion of the canonisation of St. John of Kęty held in Kraków in 1775. It shows the Church of St. Anne, the neighbouring buildings and the Wawel Castle in the background.

In the chapel of St. John of Kęty there is a marble bust of the Saint made in 1886 by Franciszek Wyspiański, a father of the famous artist Stanisław.

In the crypts there are the tombs of university professors. There are also relics of other Servants of God: Bishop Jan Pietraszko (1911-1988), who was a pastor and auxiliary bishop of the Kraków Archdiocese; Jerzy Ciesielski (1929-1979), a married layman and academic, and Adam Opatowski (1574-1647), a professor and rector of the Kraków Academy.

The Holy Father John Paul II visited the tomb of St. John of Kęty on 8 June 1997, during his meeting with Polish academics in the Collegiate Church of St. Anne.

On leaving St. Anne’s, it is worth visiting the cell of the St. John of Kęty, where he lived as a professor of the Kraków Academy, and which was later changed into a chapel. The cell is located at 8 Św. Anny Street, the entrance being from the Jagiellońska Street. One can see the former sarcophagus of the Saint, a magnificent work of art dating from 1549, and a statue of the Saint. In the basilica of St. Florian in the district of Kleparz there is a banner from the time of the canonisation of St. John of Kęty. The banner has been kept in the chapel built to the honour of the Saint.

The only church dedicated to St. John of Kęty was erected in the district of Widok in 1983-1992. In its altarpiece there is the 18th century painting of St. John in glory. The painting belongs to the Collegiate Church of St. Anne. 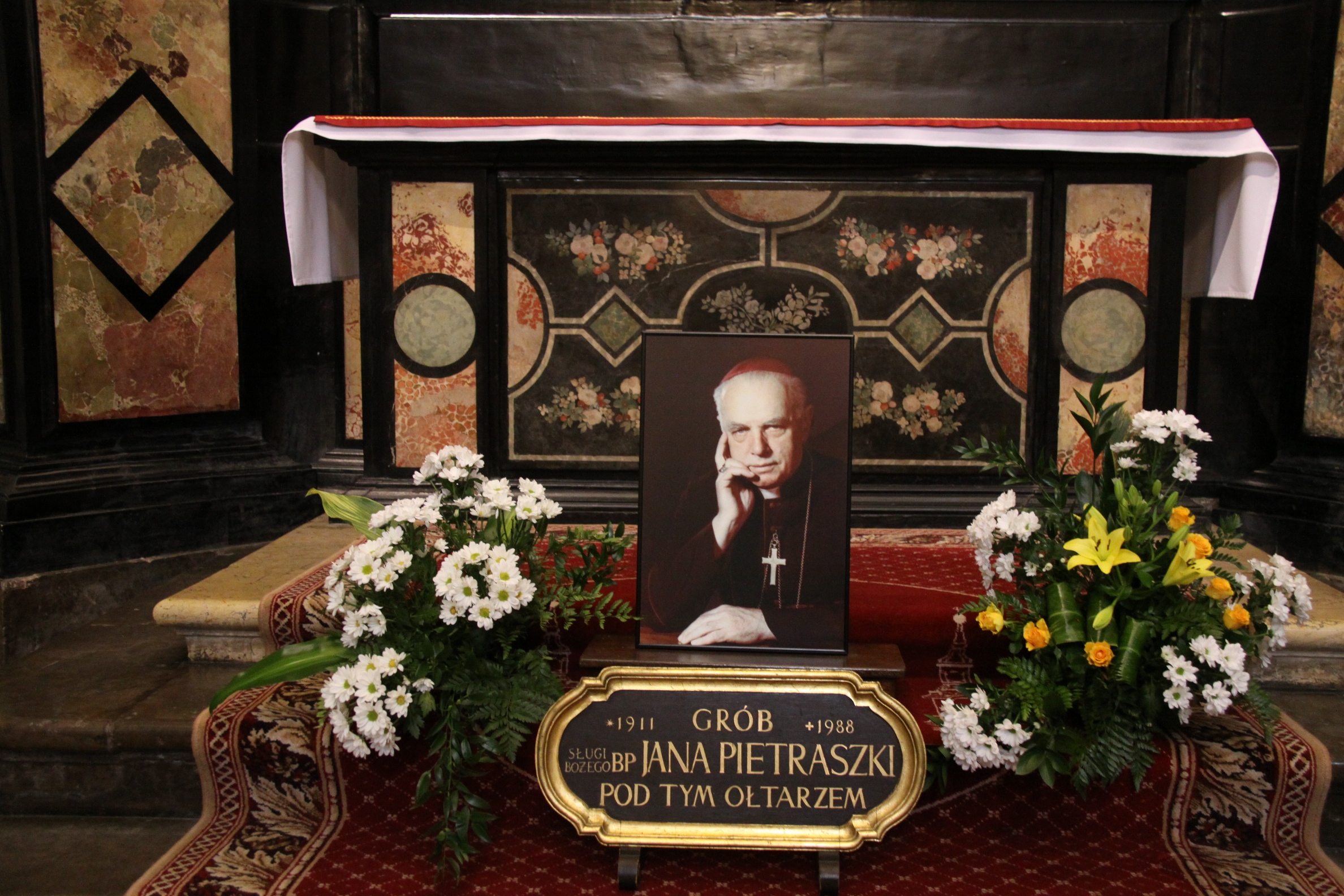 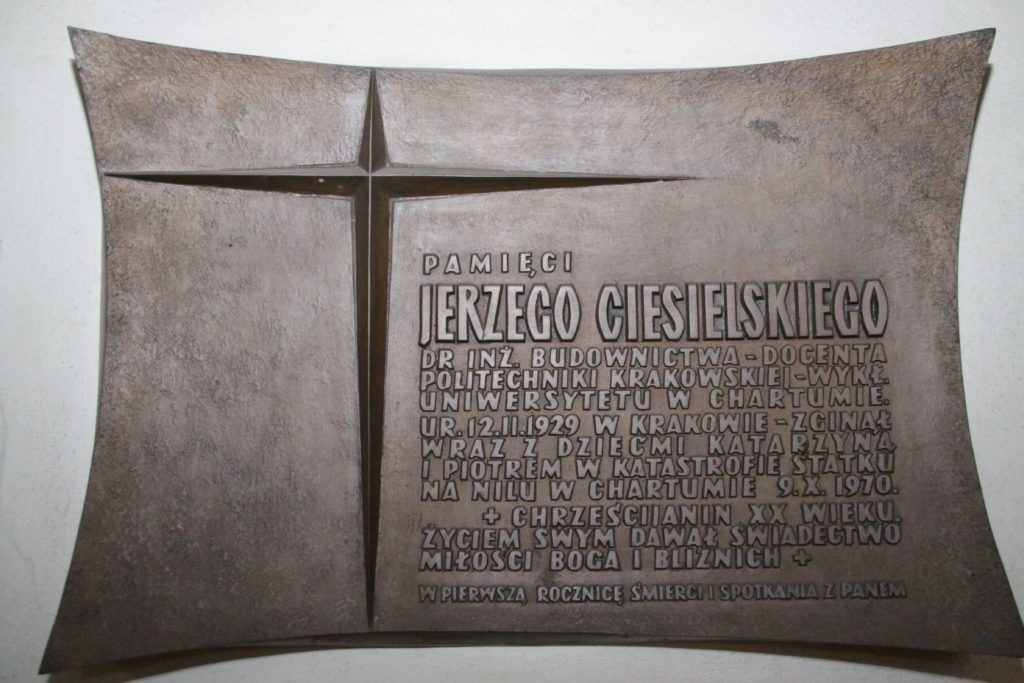 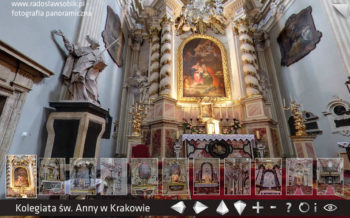 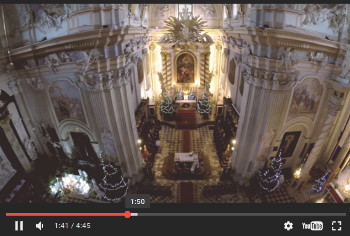